skip to main | skip to sidebar

Well, considering it has been many months since I have put anything on here, I suppose an update is in order. If anybody is still checking this after all that time, leave a comment and I will try to post more frequently. Also, I am setting up another blog for ministry updates and will probably switch mostly to that one--more about that later.
Where to start? By my last post I suppose it's obvious that there were some different options for us and decisions we had to make. It took awhile, but once we started moving and asked God to show us if it was the right path, things started coming together pretty quickly! For one, we were looking at various missions organizations to join and when to do so. Usually the process literally takes months or years, filling out all the paper work and then raising support and being placed in a ministry. Or at least we thought so. One Sunday after a particularly convicting sermon on decisions, we decided that the option we felt was best to more forward on and where God could really use us was to join the Center for Indian Ministries, CIM, under Oak Hills Fellowship. We had been praying about going in this direction for quite some time and were confident in moving forward, so we asked God that if this was the right next step that He would make that clear and open the doors. Well, after filling out the paperwork we found ourselves fully accepted within a few weeks!
Okay, now on the the slow and steady process of raising support and getting set in various ministries. Actually, within months we were moved out to Cass Lake on the Leech Lake Indian Reservation on the newly reopened campus of the Mokahum Ministry Center. Mokahum is a school to train and disciple Native American believers with biblical and minsitry training and life skills. It is for any age post-high school and offers one year and three year programs. This isn't actually a new idea; it was once open under C&MA (Christian & Missionary Alliance) 30 years ago and had been sitting vacant. Until the property was offered to CIM under the stipulation that it be used once agin for Native ministry.
This wasn't something we had planned to be directly a part of, but someone to live on site and be in charge of facilities was really needed before it opened and we asked to consider filling that role. After a lot of prayer and thinking, we decided to take that offer. The ministry of Mokahum is something we support wholeheartedly, and although it isn't quite what we had in mind initially, it is an honor and a blessing to be a part of.
So now we live here and Corey is the Facilities Director. Right now we have one guy student, and Corey spends time with him and works with him on carpentry etc. skills. As more students come on board, we will have more of a role as Resident Staff.
We have also gotten involved with a little chapel here in Cass Lake, also called Mokahum, and teach the children's ministry half-time. Working with children is still our heart and delight and it is great to be a part of it. We have also really enjoyed the change to a little chapel with a small congregation, no building or fancy equipment, nothing besides voices more music on Sunday mornings--just a gathering of people who truly love Jesus and each other.

The CIM team: what a wonderful and godly group to be a part of!

And of course, our other big news: we are expecting!! Yes, along with all those changes I am pregnant with our first child. And just a little bit excited about it! :) What a blessing! We just found out that we are having a baby boy and are excited to welcome him sometime around March 4. 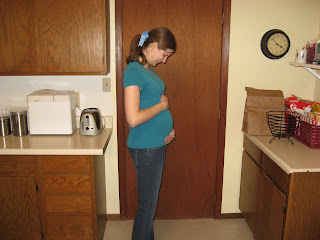 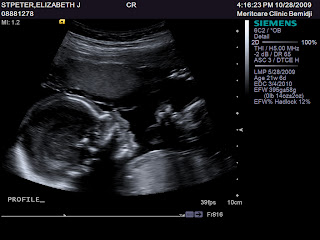 You are a sharp 18 year old with the wisdom to decide what you want to do with the rest of your life. After making this decision and declaring it to the world, you find the perfect college, and with that education under your belt, you will be able to filter through the job market, find one that you think is just right, get that job, and live happily ever after, and throw in there meeting that spouse you always dreamed of and having 2.5 kids. Isn't that the picture that is painted to us as graduating high school seniors? You choose "door A" which will lead to "door B" and so on.
Funny, reality looks much different. I don't think many 18 year olds have much of a clue what they want to do with their lives. There are things like college loans which mean that moving from A to B takes a while and some things can't happen in the order you pictured. The perfect job just doesn't appear. There is waiting and then there are decisions. In fact, there are multiple options that all look good and you have to pick one.
While we were in Italy, Jim told Corey "multiple doors will be opening soon and you will have to pick one to go through; make this choice carefully." How true this is! It's kind of scary, but exciting. Exciting to see how God is working and knowing that He will be faithful, and wanting to serve Him the best that we can.
It may not be as neat and easy as that first picture, but I much prefer reality. I am enjoying this time in my life and love being on this adventure with my husband and trusting in God together.
Posted by Ellie at 7:07 AM 1 comment:

the latest adventures of Lucy

So, Lucy has always had a love of the Christmas tree, especially when the lights are on. We moved all the ornaments within her reach and she has gotten yelled at many times... but yesterday she somehow managed to get all the way inside the tree. It was ridiculously cute. She just hung out for awhile and seemed to know that nobody could reach in to get her out. And the tree is so thick that if you didn't know she was in there she could hide out. Here are some pictures to prove it. :) 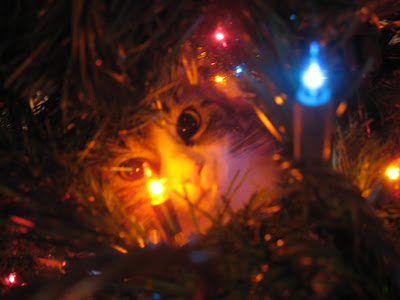 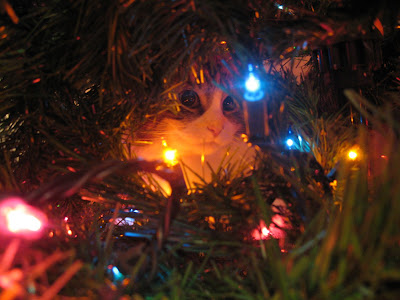 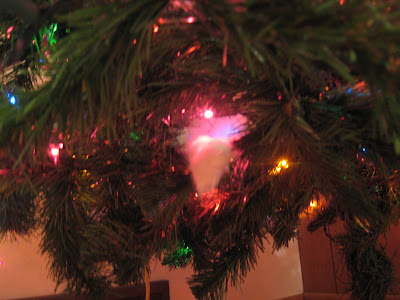 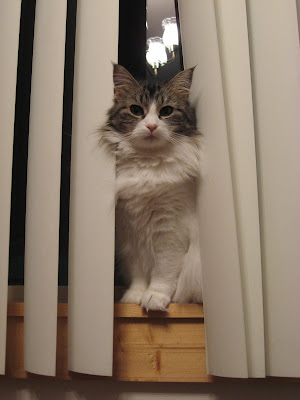 After extensive data collection and analysis, Corey and I have broken the code of cat language. The general consensus that "a cat says 'meow'" is incorrect; we have been missing a consonant the whole time. (Perhaps this was a shift that happened over time or only in certain dialects.) The truth is that a cat says "menow" meaning that the two morphemes are "me" and "now." And we propose that everything else a cat says revolves around these two basic meanings. If you ever meet our cat, you will know how we know this.
Posted by Ellie at 3:26 PM 2 comments: 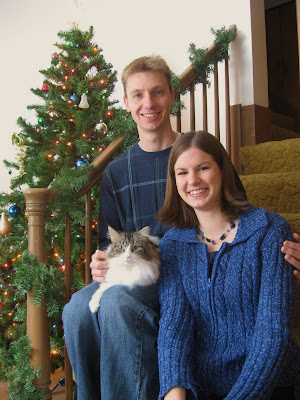 Putting up the tree...
I am the queen of Christmas lights; we quit counting at 6, but I think there is 8 strings of lights on our tree. What can I say, it's that Shuka blood. 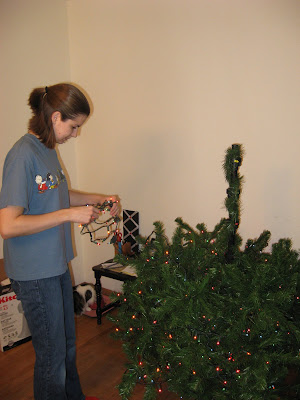 Corey helps with the ornaments. 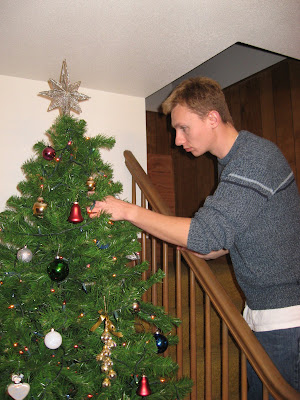 Isn't it beautiful? I love having room for a big tree! Thank you Grandpa and Grandma Reierson! 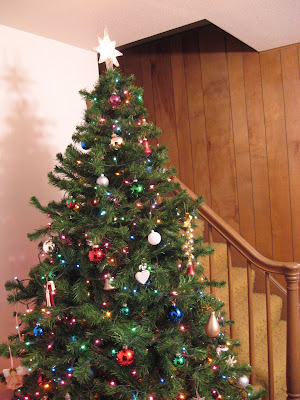 Yes, she is adorable and loves the tree too...
loves to knock off all the ornaments within her reach and try to get inside the tree. :) 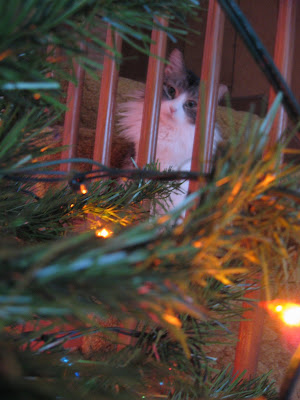 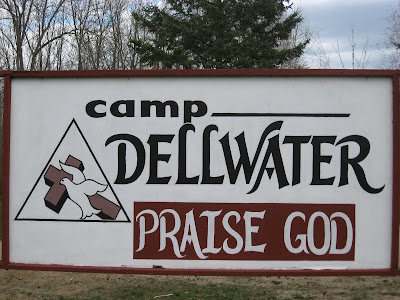 Tomorrow we head to Camp Dellwater! The kids from the Red Lake Indian Reservation come on Tuesday and will be there until Friday. We are very excited to be a part of it again and are so thankful it continues to be such a strong ministry. The kids really look forward to it all summer and it has become an important part of some of their lives. Some are coming back for the third, fourth, or fifth time. And there is just nothing like actually living in a cabin together and doing all kinds of fun activities to build those relationships and memories.

One very exciting this is that Valerie is going to share her hope story with all the campers! Valerie went to camp for as many years as she could as a camper and then started coming as an LIT (leader in training) We also keep in close contact throughout the year. It has been a kind of tough year for Val, but she has really taken some time to think about her faith and what God means to her, and now she really wants to share that with others. It is such an encouragement to me and I am so proud of her!

The girls that were we saw on Sundays for most of the year are also going to be there and be in my cabin and I am excited to have this time with them and really want to challenge and encourage them.

Corey will also have an LIT in his cabin, and we are hoping some guys will be more interested in keeping in contact throughout the school year.

Please keep this camp in your prayers!!